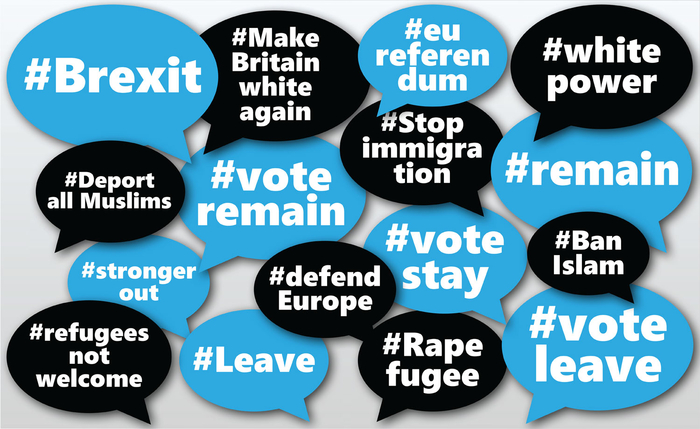 HateLab and the Behavioural Insights Team (BIT) have been awarded a grant under the Economic and Social Research Council’s Governance After Brexit call.  The project, Hate Crime After Brexit, will examine the relationship between the referendum vote and the associated Leave campaign and the rise of race and religious hate crime in the UK at national, regional and local levels.

The Brexit vote was linked by the Home Office to the largest spike in police recorded hate crime in 2016/17.  In 2017/18, there were 94,098 hate crime offences recorded by the police in England and Wales – an increase of 17% compared with the previous year. This continues the upward trend in recent years, with the number of hate crimes recorded by the police having more than doubled since 2012/13.  The recent spikes in the number of police recorded hate crimes in the UK have opened a debate on the contrasting picture painted by different sources of data.

The Crime Survey for England and Wales (CSEW), the most reliable source of information on crime, has shown a consistent decrease in hate crimes over the past decade – from 307,000 a year averaged over 2007 to 2009 to 184,000 a year averaged over 2015 to 2018, the lowest number on record. This is in line with the decrease in general crime.  However, by aggregating 3 years of hate crime data to generate an annual average, the CSEW data fails to capture short-lived ‘peaks’ in incidents connected to specific events, such as the Brexit vote and terror attacks – effectively smoothing out these increases over the longer period required to produce robust estimates.

The contrasting picture painted by the CSEW indicates the upward trend in police recorded hate crime over the last five years has been partly driven by increases in crime reporting by victims and improvements in recording by the police.  However, police and policymakers remain uncertain about whether there was also a genuine increase in hate crime perpetration following events such as the Brexit vote and the terrorist attacks in 2017.

Professor Matthew Williams, Principal Investigator on the project, said: “A question I am frequency asked by policymakers is did these events motivate more individuals to take to the streets and the Internet to commit hate crimes?  This project will address the key challenge of determining if the Brexit vote led to a genuine rise in hate crime perpetration, potentially rebutting the claim made by some that the police recorded spikes were merely a result of victims’ increased willingness to report.”

Working with BIT and the National Online Hate Crime Hub, the project will link multiple offline and online datasets, providing the most complete picture of hate crime to date.  This grant is the 5th made to HateLab, bringing the total amount of funding to £1.7 million since 2016.